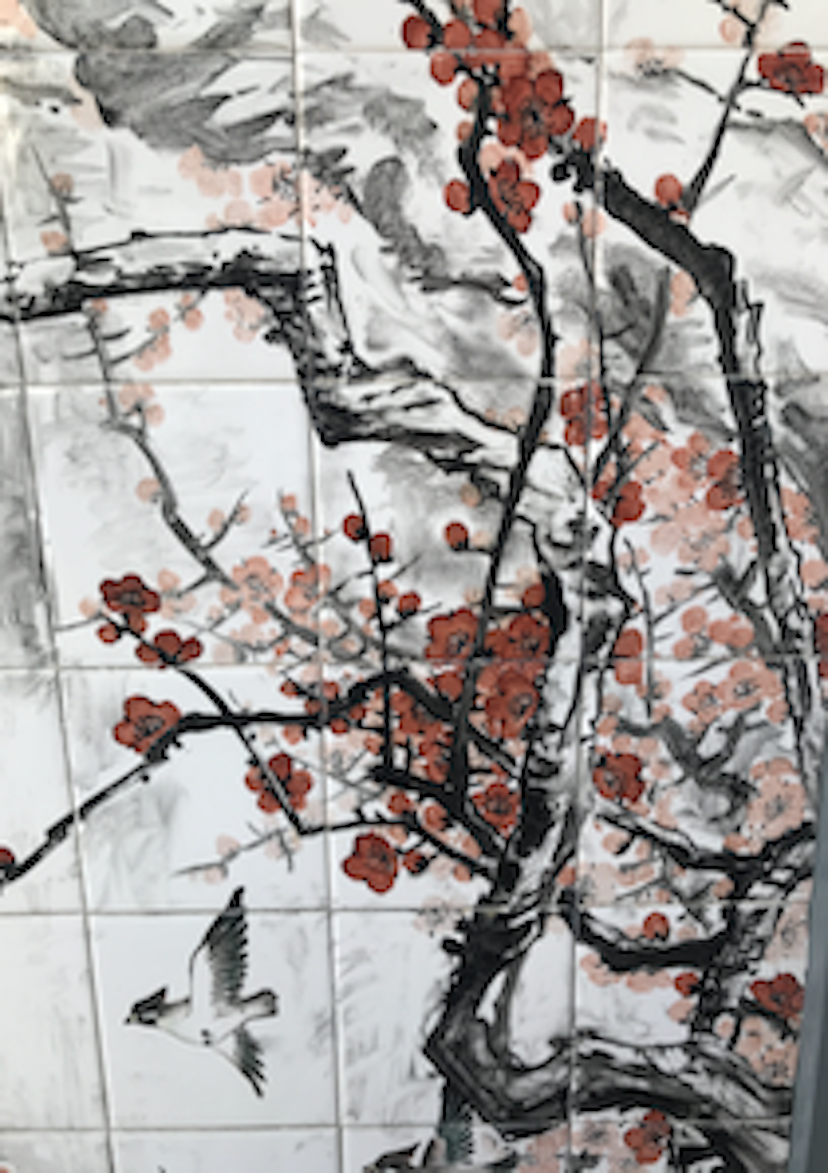 Anti-Chinese sentiment and sinophobia have arisen as one of the current corona virus’s most serious side effects. These conditions have challenged the Chinese diasporic community’s sense of home. Far from mere diversion in a time of turmoil, Chinese literature has the power to disrupt state narratives and contest polarising claims from politicians. Online literature during the pandemic has not been limited to the Chinese diaspora, and its themes have not been limited to hate crimes. Online literature in the diaspora and in China debunks grand narratives set by the state, and provides a sense of nonphysical homecoming for them. Like these Chinese diasporic writers, we too can find our belonging with each other virtually.

Around this time of the year, I would usually be knocking at my grandparents’ door in China for my annual visit. It is my grandpa’s eighty-fifth birthday this summer. I have rehearsed in my head what I will say and give to him when I see him. But what he cannot have is what he wants most – to see me. Since late January, a travel ban has been in place between China and the US; non-Chinese citizens cannot travel to China, and non-US citizens cannot travel to the US. Transnational borders have hardened physically and, more excruciatingly, psychologically and emotionally.

Anti-Chinese sentiment and Sinophobia have arisen as one of the most serious side effects of Covid-19. I am based in the US, where the Trump administration has been intensifying such sentiment with arguably inflammatory rhetoric. But the problem is just as stark in the UK, where many demand that Prime Minister Johnson make China “pay” for, in their opinion, having wrought the virus onto the world. Blame like this is not innocent government commentary. Instead, as Kerry Brown and others suggest, UK and US politicians targeting China so vehemently “stroke racial tension” in their home countries, leading to physical and verbal attacks against Asians. Incidents of xenophobia and racism related to the pandemic have taken place all over the world and are too plentiful to list here. In the UK, hate crimes against Chinese in the first three months of 2020 tripled the amount of the prior two years.

The xenophobic attacks have made the Asian diaspora vulnerable, even though some targeted are not Chinese, or have never been to China. For many Asians, we cannot travel back to our home countries in the summer because of the travel restrictions, nor could we feel home in foreign countries because of the attacks. We are lost in limbo – doors shut from us, borders hardened; we are visible and invisible. What will the world be like after the pandemic: will it go back to the globalised world as it previously was? Will national borders get further tightened to prevent future epidemic, political, and national security threats? What is the “new normal”? All these questions beg for answers among all the uncertainty, yet one thing is certain. Humanity must strive to protect basic inalienable rights as citizens of states and/or global citizens. The Chinese diasporic community and their literature are of great value in facilitating an understanding of the importance of preserving such fundamental human rights.

Chinese diasporic literature has the power to overshadow the grand propaganda espoused by the states. This is a critical function of literature at a time when media narratives can be overrun by political confrontation. Russell A. Berman (2020) argues that the state is the primary vehicle for self-preservation, be it against epidemic, political, military, or economic threat. For some countries, the pandemic has provided a convenient vehicle for the states to push their political agendas like Sino-US trade war and anti-Asian sentiments, by closing borders, building new favoured relationships, and scapegoating one another by advocating the re-emergence of the state.

Far from mere diversion in a time of turmoil, Chinese diasporic literature has the power to disrupt state narratives and moderate polarising claims from politicians. Literature that is by and about the vulnerable enlightens its readers with empowering individual stories. And though many bookstores are closed and traditional publishers crippled, literary production has far from halted in the coronavirus’ wake. Online essays, personal narratives, and op-eds have been the means by which the diasporic community has made its multiple voices heard. Some who have not experienced anti-Asian attacks themselves only realised the problem’s severity through online essays by diasporic Asians. These memoirs in miniature, published by and on such topics as anti-Asian hate crime, educate readers in revealing that anti-Chinese sentiments have had a long history in Western countries and emphasise the importance of Chinese communities in the West. In addition, publicising their shared experience has united the diasporic Asian population together to fight against these hate crimes. Besides, some essays online brought together Asian diasporic populations by portraying the mutual worries of first worrying about their families back home when the outbreak occurred, and, secondly, over their parents in Asia conversely worrying about them in Western countries.

Online literature during the pandemic has not been limited to the Chinese diaspora, and its themes have not been limited to hate crimes. Chinese diaspora helps promote Chinese literature as a way to expose the realities during the pandemic. Fang Fang’s diaries, which first appeared on Sina Weibo, were an experiment in honesty and direct documentation, narrating her witnessing of the pandemic and people’s lives during lockdown in Wuhan from January 25. But its publication became controversial in China and highly criticised by conservatives there. Many in the diasporic community have responded to her diaries, supporting her works by reposting them on WeChat, promoting it on op-eds, etc. Her diaries quickly got translated and published in America (by HarperCollins press), and related pieces, reports and interviews appeared around the world, such as “témoignage de gratitude.”For the most part diasporic communities and foreign countries claim her as a hero, calling her a “new critical voice” to reveal the truth of Wuhan during quarantine time. Many have followed Fang Fang’s example by documenting the events of the pandemic.

This readily accessible online literature has allowed them to fulfil another purpose – that of a non-physical homecoming. Traditionally some Chinese diasporic writers use literature as a non-physical homecoming. By listing Lin Yutang as a pioneer Chinese writer who returned to his homeland through literature, Ha Jin makes the argument that a physical return to the homeland may not be possible for an émigré like himself, but “only through literature is a genuine return [possible]” (Ha Jin, 2008: 22). Ha Jin is a prime example of successfully crossing borders and returning home through his literature. Connecting not physically but virtually, the global Chinese diaspora forms a “digital diaspora,” a term recently coined in The Handbook of Diasporas, Media, and Culture, referring to technology’s connective capacities for border-crossers who have lost a material and symbolic home.

With technology, diasporic populations develop networks that enable them to play an active role in an increasingly transnational world. For example, wenxuecity.com, founded in California in 1997, includes news, cooking, blogs, etc. Literary pieces published on their blog capture the challenges of daily life and personal stories during quarantine life. These online platforms, created and read by Chinese diasporic communities, serve as a “liminal space” during the pandemic. These platforms offer some comfort to the Chinese-speaking public, but also enables them to cross the borders while navigating the chasms. I call it a liminal space because the digital communities both provide the Chinese diaspora a space to generate a sense of belonging and pose new challenges respecting their sense of home. Chinese diasporic writers nowadays use creation, be it painting or literature or music, to seek a sense of belonging.

Meanwhile, while Chinese diasporic literature provides a medium for the diasporic community to generate a sense of home, it also shows their sense of home has been destabilised during the pandemic. A Chinese-American writer living in Houston, Sheng Lin, has published in Peng Pai News about her journey back to the US from China during the pandemic. In her article, she calls America her second home and writes about a happy reunion with her husband. Unfortunately, she was criticised by nationalist Chinese online, who wrote such attacks as, “don’t ever come back, you Chinese diaspora,” though her article and comments were later all deleted. Such attitudes escalate resentment toward the Chinese diaspora, as if we no longer were “pure” Chinese, no longer accepted in China. The original title of her article, “Return to American home,” was changed by Sohu News to “Does she dare to go to America? A Chinese woman taking out green card and shocked many in the airport, but she said she was going home.” This appeared to be an effort to embarrass her. The criticism stems from the fact that Chinese back in her homeland expect her undivided loyalty, and she should see China as her only home. Yet with her husband and family in America, and having settled in America for many years, that she would call America her other/second home seems understandable. Still, the rejection of her and her article in China show that to Chinese emigrants, their sense of belonging to their homeland is permanently conditional, so as their belonging in their adopted new lands.

As literary scholars, we cannot stand on the frontlines with the doctors and nurses to save our fellow citizens, but we can call for people’s awareness of the social, ethical and ethnic issues arising from the pandemic. Covid-19 does not discriminate, and it crosses borders fast and quickly. Borders have hardened during the pandemic but we, as cultural critics, can soften the borders by accepting, learning about and working with each other. Like these Chinese diasporic writers, we too can find our belonging with each other virtually.

Retis, Jessica, and Roza Tsagarousianous, eds. (2019), The Handbook of Diasporas, Media, and Culture, Medford, OR: Wiley-Blackwell.