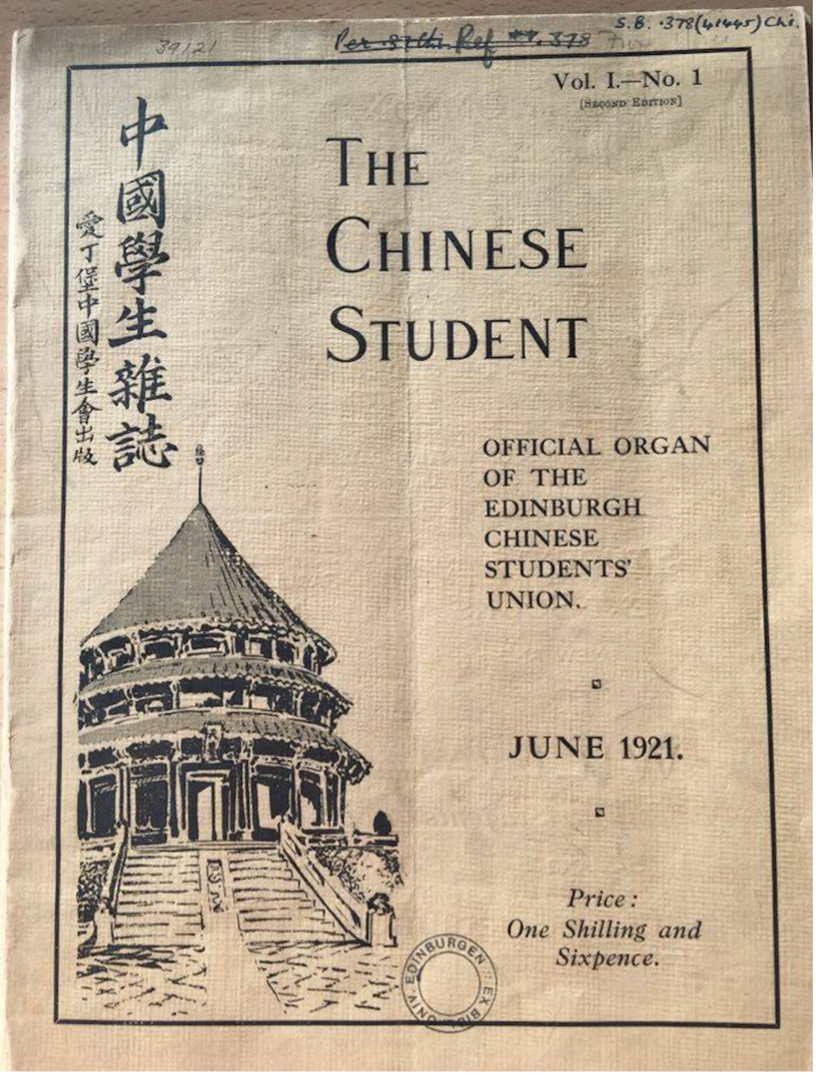 Observers of migratory Chinese in port cities have been producing writings that highlight the diversity of “Chinese” identities and lifestyles throughout collecting micro stories of individuals. Simultaneously, their publications ­­––newspaper, magazines, and encyclopaedia––functioned as a transnational platform linking different Chinese communities in different locations.

Image: Cover of The Chinese Student, 1921

“I can’t define myself.” This is how my friend, who was born in Hong Kong, then raised and educated in the UK, described herself a few years ago. What she said made me ponder: how can we narrate the history of migratory Chinese and Asian people whose identities have been extremely flexible and diverse, and sometimes difficult to define even for themselves?

Long before the current pandemic and the rise of anti-Asian hate crime in Anglophone countries (Parveen and Huynh, 2021; Ramos, 2021), scholars working on Chinese descendants or nationals living and moving within port cities like Singapore, Hong Kong, Yokohama and San Francisco, have faced and addressed a similar conundrum. In these trading centres that function as sites of interactions, languages, ideas, and identities are being redefined and transformed (Harper & Amrith, 2014). As a researcher of the history of Chinese in port cities, I believe the concept of “Chinese” is still a valid analytical tool, since the word embraces contradiction, flexibility and multiplicity, rather than a homogeneity.

From past to present, journalists, travellers and historians have made efforts to capture the complexity of the Chinese communities in the borderland. Consciously or unconsciously, both internal and external observers of the migratory Chinese wrote a detailed biography of individuals and tended to take prosopographical approaches, a research method which focuses on a specific group of people. Carl Thurman Smith, a missionary and a historian of Hong Kong explored the numerous lives of the marginalised Chinese in nineteenth century Hong Kong (Smith 1985; Smith 1995). During his initial research on the missionaries, Smith realised that there was a “paucity of detailed information about the Chinese converts” and switched his research topic to Chinese Christians (Wong 2010: 231). Who were they and where did they come from? To which economic and social groups they belong? Were they “less Chinese” or “more Westernised”? To answer these questions, Smith focused on traders, criminals, women and boat dwellers living around the city, instead of colonisers, governors, bureaucrats, and missionaries alike. The archive of his almost 140,000 hand-written note cards is still one of the most useful databases for the historians of Hong Kong, Macau, and Guangzhou (Wong 2010: 231). Recognising the complex and rich history of Chinese settlers and migrants in Hong Kong, Smith meticulously recorded lives of Chinese individuals. Thereby he avoided describing the Chinese community as a homogeneous group.

Internal observers themselves faced the difficulties of clarifying who belonged to which group of “Chinese.” The identity of Wu Tingfang 吳廷芳 (Fig. 1), the Qing government’s Minister to the US (1896–1902, 1907–1909) is a case in point. Wu was born to a Cantonese father and Hakka mother in the Straits Settlements in 1842. After being educated in Guangzhou and Hong Kong, he went to the UK and studied law at University College of London. Following his return to Hong Kong in 1877, he became a barrister and the Chinese Unofficial Member of the Legislative Council. In the early 1880s, Wu moved to Tianjin and started working with Li Hongzhang 李鴻章. Subsequently, the Qing government appointed him as a minister to the US (Cook 1907: 92-93; Pomerantz-Zhang 1992: 1-3, 26). Experiencing hierarchical racism in Hong Kong and anti-Chinese racism in the US, Wu strengthened his nationalist identity (Pomerantz-Zhang 1992: 34–35).Wu’s own identity can be characterized as shifting due to his transregional career and background. External observers tried to clarify the obscure identity of Wu. In March 1897, the editors of the Straits Chinese Magazine, emphasised that Wu was essentially a “Straits Chinese’, in response to Hong Kong newspapers who had called him a “Hongkong boy”. The article on Wu in the magazine stated as follows:

To speak of him in that way is to leave out of the account the early part of his life which he spent in these parts. No doubt it was in Hongkong that His Excellency first attracted the attention of the Chinese government; but we can scarcely credit him with being ashamed or reluctant to acknowledge himself as a Straits-born Chinese. His countrymen here ought to look up to him as a brilliant example of a successful self-made man (The Straits Chinese Magazine 1897: 29).

The Straits Chinese, a group descended from Chinese migrants who had settled mainly in Penang, Malacca, and Singapore, were proud of Wu’s success and career in China, but at the same time, they claimed that Wu was originally from the Straits Settlements and not from the Middle Kingdom or Hong Kong. Frost argues that the Chinese settlers living beyond the territory of the Middle Kingdom gradually developed “a self-conscious sense of unique regional identity” during the early twentieth century, as can be seen in the case of the Straits Chinese (Frost, 2005: 47).

Their departure from homelands whether imaginary or real did not necessarily mean Chinese migrants were fragmented and isolated. They exchanged news, opinions, thoughts, and feelings via the publication of books, newspapers, and magazines. In 1921, the Chinese Students' Union at the University of Edinburgh printed their own magazine, The Chinese Student (Fig.2). Its readers were in the UK, Iceland, Cape, Greece, Romania, and other countries in which members of the union resided (Edinburgh Chinese Students' Union, 1921b, 19). The two volumes of magazines included articles on the history and economic, social, and political environment of the Chinese in South Africa, Trinidad, Dutch Guiana, Singapore, British Columbia, and the Republic of China (Edinburgh Chinese Students' Union, 1921a, 1; 1921b, 19). Reporting different lives of overseas Chinese in different places, The Chinese Student enabled its readers to understand the global context of their migration and local lives. Migratory Chinese also solidified their senses of belonging to local and global Chinese communities throughout participation in the compilation of an encyclopaedia about themselves. Present Day Impressions of the Far East and Prominent & Progressive Chinese at Home and Abroad was a thick encyclopaedia on key Chinese figures and their living worlds in Southeast and East Asia (Feldwick, 1917). From today’s viewpoint, the use of the term “progressive” was questionable as it implied non-Anglophone Chinese could be “unprogressive.” Nevertheless, photos and detailed descriptions on buildings, parks, companies, factories, individual biographies, cityscapes included in the encyclopaedia demonstrate the diverse range of different cultures and societies of the Chinese communities in different places.

Anglophone platforms sometimes enabled cross-ethnic exchanges of ideas. Facing the rise of nationalism in their homelands, Chinese and Indian citizens in the Malay peninsula discussed questions related to race and nationhood between 1929 and 1930 in the columns of the Malaya Tribune (Chua, 2014: 62–63). Migratory Chinese understood the experiences of other Chinese and other ethnic communities through engaging with these platforms and thereby they retained and redefined the sense of “being Chinese.”

Chua argues in reference to the experiences of “Anglophone Asians” in the Malay peninsula that “being ‘Chinese’ or ‘Indian’ could encompass a range of political, cultural, and linguistic characteristics” (Chua, 2014: 77). The term, “Chinese” did not necessarily represent a coherent singular identity shared among a particular group of people speaking the same language in a specific geographical territory managed under a single government. Similarly, Carroll discusses how the Chinese elite in Hong Kong developed peculiar local identities by cooperating with both the British colonial and the Qing authorities in the late nineteenth and the early twentieth centuries. The “collaboration” with the British colonial authorities, encounters with racial barriers, the surge of Chinese nationalism, and mass strike caused by the anti-European sentiments among the Chinese working class in the mid 1920s, all shaped the unique consciousness of the Chinese “bourgeoisie” in Hong Kong (Carroll, 2005: 148). As it can be seen in Chua and Carroll’s works, both internal and external observers of migratory Chinese communities recorded, reported and narrated historical transitions of manifold Chinese identities. Drawing on the body of such works, historians can keep investigating a critical issue – namely, how the social, political, cultural, global, and local conditions have defined a wide range of Chinese identities in the past.

In July 2021, in the podcast of the Asia Society, Alice Su, the Beijing Bureau Chief of the Los Angeles Times, who has provided a detailed account of the key issues in present-day China based on her first-hand observations, concluded her talk with the message that Chinese people in China are not “monolithic”. She emphasised the importance of understanding stories that take place at the “granular level of individuals” and that “there was a wide range of people in China, like 1.5 billion, living different lives” (Alice Su, 2021, between 50:30-51:25). Likewise, the meanings of “being Chinese” and the concept of “Chinese-ness” are not monolithic. Focusing and narrating the stories at the “granular level of individuals,” it is possible for historians of the port cities to highlight the heterogeneity of “Chinese” culture and people.

Cook, John Angus Bethune (1907), Sunny Singapore: An Account of the Place and Its People, with a Sketch of the Results of Missionary Work, London: E. Stock.