British Chinese or British ESEA? Articulating Creativity and Care across Scales and Disciplines 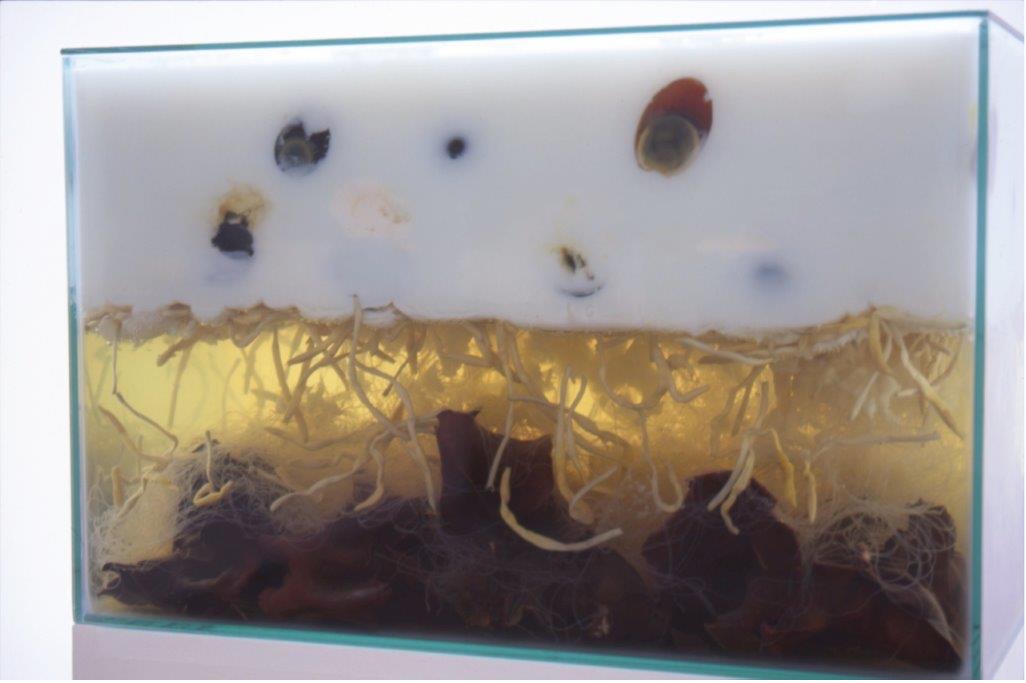 This position paper advocates for more scholarship on British Chinese and ESEA communities in the aftermath of the COVID-19 pandemic. It briefly outlines our vision for future research in relation to visual arts and other forms of creativity but also presents some thoughts that could inspire new research directions for scholars with other disciplinary backgrounds and interests.

The COVID-19 pandemic brought anti-Asian racism to the fore globally, with the shootings in Atlanta in March 2021 being only the latest and most violent instalment in a much longer history of discrimination and structural exclusion. While media coverage typically focuses on the US, the UK has also seen a spike in hate crimes against East and Southeast Asians since the start of the pandemic. UK police data indicates a 300% rise in hate crimes towards East and Southeast Asians in 2020, as compared to the first quarters of 2018 and 2019 (Clements, 2021). Recent testimonies on podcasts and social media by British East and Southeast Asians (henceforth ESEA) give ample evidence of deep-seated experiences of exclusion and aggression, highlighting that aggression during the pandemic reopened much older wounds.

In this position paper, we encourage more scholarship on British Chinese and ESEA communities on two basic grounds. First, there is a dearth of research on these communities to date (for some notable exceptions dealing with British Chinese communities, see Benton & Gomez, 2008; Francis et al., 2017; Kwan 2020; Thorpe & Yeh, 2018) in comparison to their American counterparts. While comparison with ESEA diasporas globally may be useful, we would caution against the direct application of frameworks derived from the much better documented American experience to the UK context.

Here, we briefly outline our vision for future research but we also hope to present some thoughts that could inspire new research directions for scholars with other disciplinary backgrounds and interests.

The first and most fundamental issue revolves around choices over which category of identification researchers may focus on. We strongly argue that the answer cannot be prescriptive, but needs to be flexible and adapt to its context. The ESEA label, which gained traction around July 2020, can be read as a ‘call to action’ among East and Southeast Asians (Phung, 2021); communities which are rendered invisible by contemporary Black and Minority Ethnic (“BAME”) multiculturalism. This label has been the springboard for the creation of new alliances, movements, and organisations to mobilise British ESEA individuals, including besea.nCovid-19 Anti-Racism Group, End the Virus of Racism, East and Southeast Asian Scotland, ESEA Online Community Hub, and the newly inaugurated ESEA History Month in September.

Recent calls to turn scholarly attention to the newly invigorated category of British ESEA (for instance, Yeh, 2021) have responded proactively to the rise in prominence of this category for identification by focusing on it, as the best scholarship should. There are of course strong reasons for supporting calls for developing wider solidarities and forms of intersectional ally-ship, such as across Chinese, East, and Southeast Asian communities, which we wholeheartedly support. We encourage scholars to develop this research focus further with detailed studies of online and offline coalitions and community organisations, as we have begun doing and hope to continue in the coming months and years.

However, we remain mindful of positionalities and voices that may be erased or side-lined in pursuit of broader networks of solidarity. We encourage scholars to enter this field of research with an open mind as to where, when, why, by whom and with what outcomes the categories British ESEA or Chinese are mobilised. An attention to generational differences and different waves of migration for instance, may yield very insightful results. Kwan’s (2020) work is commendable for examining generational differences in the ways in which belonging is articulated among British Chinese living in London. Equally, the mobilising potential of embracing different forms of belonging and identification will vary across a range of sites of representation, including cultural and creative industries (see Yeh 2021), entrepreneurial networks, social media platforms, the visual arts, community centres, and East and Southeast Asian shops and restaurants, which may become loci for community building.

With a geographical and anthropological lens at hand, we would encourage researchers to take seriously the notion of scale. The scale at which belonging is articulated is entwined with choices over the labels employed and the contexts in which they may be mobilised. With the term scale, we refer to every level from individual embodiment to identifications with global diasporic communities, and the many gradations in between. We note, for instance, that the label British ESEA has particular appeal for younger generations as they interact online. Conversely, it may be that older generations who interact less via Instagram and Twitter (though this may be changing) are more closely aligned with the identifications enabled through Chinese community centres (see for example Kwan, 2020). An individual’s levels of proficiency in English and in the various ESEA languages plays an important role in determining how communities are formed too. This may result in older generations remaining keener to identify as British Chinese, while younger generations may align with the broader label British ESEA. We call on scholars to critically interrogate how identification as British Chinese or ESEA, or other emergent and established categories (including BAME), may operate differently at different scales and through different forms of creativity and empowerment.

A related geographical point pertains to the regional focus of research within the UK. We encourage scholars to engage more with community organisations that operate beyond London. There, British Chinese/ESEA communities may face different challenges in light of their relative isolation, the smaller size of those communities, an ageing population, and even more limited resources for community advocacy. The geographical diffusion of British Chinese communities has roots in the catering industry. Competition between family-owned takeaways necessitated that families moved far apart, hindering British Chinese individuals’ ability to organise collectively prior to the advent of the internet (Benton & Gomez, 2008). Today, researchers in support of #StopAsianHate should remain cognisant of this history, by attending to communities and organisations outside London. The most productive approach may be to combine an analysis of online mobilisation and creativity with in-depth case studies involving semi-structured interviews and ethnographic fieldwork. Might it be possible to engage with both newer British ESEA-oriented organisations and decades-old Chinese community centres, which are adapting to changing times? This would allow a productive comparison of how different labels for identification are mobilised in different contexts and with what effects.

The third point revolves around interdisciplinarity. The substantive gap in scholarship on British Chinese/ESEA communities requires more concerted efforts to research these communities in all their complexities and diversities, whether they be in terms of geographical, linguistic, generational, class, sexuality or other differences. Interdisciplinary collaborations would fruitfully combine research methods and approaches. Given our expertise, we pursue a dual focus on anthropology and the visual arts, which illuminates the creative practices of British Chinese/ESEA communities and situates them within a wider social context. That said, we encourage scholars with different specialisms to explore creativity and agency as they are expressed in other fields. Food seems to hold a particularly productive potential (Truong, 2021), also in the visual arts (see Figure 1), but other forms of creativity and empowerment could be equally stimulating. 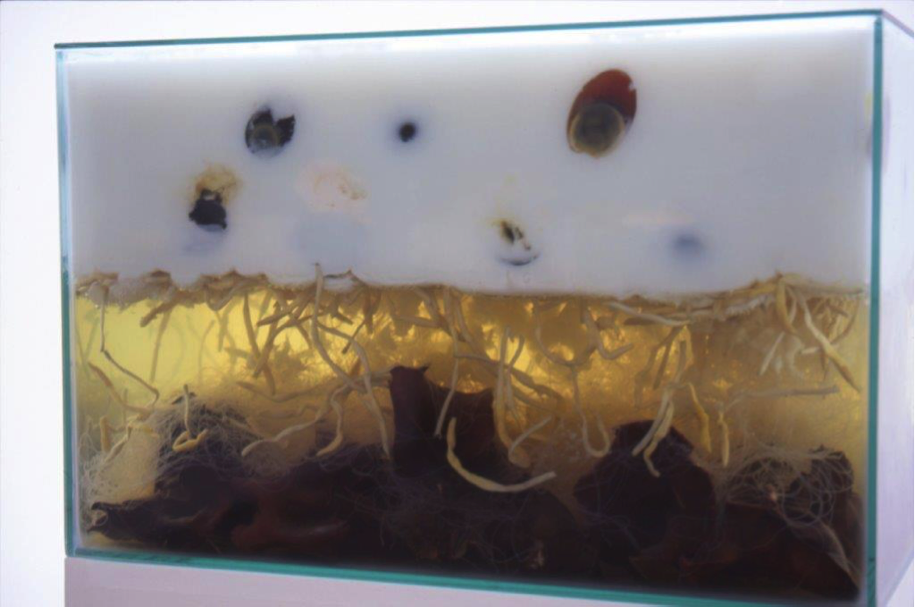 Yeu-Lai Mo’s artworks of the early 2000s involved food. What she describes as ‘borrowing from the kitchen’ saw ingredients used in Chinese fast food, taking up new lives in the display spaces of the contemporary art gallery. Her Foodscape tanks focus attention on the senses, emotions and the body, with a set of references to intergenerational relationships and family memory.

The fourth and final point relates to a participatory approach to research and community involvement. We strongly advocate developing research projects that are meaningful for and committed to empowering the communities with which they engage and which grant them the space to be genuine stakeholders in those projects. Crucially, researchers ought to remain cognisant of the dangers of essentialising or homogenising communities, or taking the voices of some to be representative of all. For this reason, a project that engages a broad range of community members from an embryonic stage could ensure that they also collaborate in envisioning relevant initiatives for community engagement. Bao’s (2021) survey of the needs and demands of British ESEA individuals is an inspiration and a resource in this respect. By investigating community needs, researchers can position themselves alongside existing struggles, and ensure that their critique remains constructive. We look forward to a time, hopefully in the near future, when research beyond online mediation and representation can resume through extended in-person interactions to examine how community is articulated and challenged through the transformative potential of embodied and material practices.

Bao, Hongwei (2021), “A Preliminary Study of the Needs and Demands of the East and Southeast Asian Communities in the UK”, University of Nottingham Research Repository. Available at: https://nottingham-repository.worktribe.com/output/5558628/a-preliminary-study-of-the-needs-and-demands-of-the-east-and-southeast-asian-communities-in-the-uk (accessed 29.07.2021).

Francis, Becky, Ada Mau, and Louise Archer (2017). “The Construction of British Chinese Educational Success: Exploring the Shifting Discourses in Educational Debate, and Their Effects”, Journal of Ethnic and Migration Studies, 43(14): 2331-2345.

Truong, Vicky (2021), “Our Elders’ Foods”, Tools To Transform: A Workbook For Asian Diasporic Organising in Europe, available at: https://toolstotransform.net/portfolio/vicky-truong-20210521-our-elders-foods (accessed 29.07.2021).