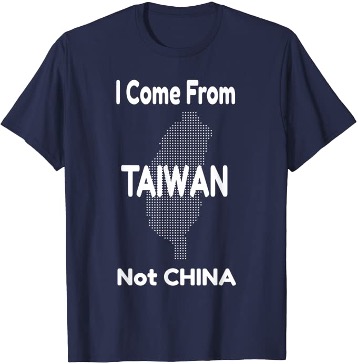 In this article, the author examines how Belgian Taiwanese immigrants negotiate their ethnonational identity, especially the term “Chinese” in the time of the Covid-19 pandemic. The study finds some differences of identity negotiation and performance strategies applied by different generations of immigrants.

The first confirmed case of Covid-19 occurred in Wuhan, China, and the disease then rapidly spread around the world. This pandemic has not only infected and killed millions of people but has also had significant negative impacts on the economies, communities, and healthcare systems of the majority of countries. Although there is still no consensus or clear conclusion in the international community about whether the virus was leaked from Wuhan’s medical laboratory, many politicians and members of the public believe that the virus originated in mainland China. Therefore, they utilise negative symbols to draw connections between the virus and people who speak Mandarin Chinese. It was common to read and hear terms such as “Wuhan virus,” “China virus,” “Chinese virus,” or even “Kung-flu” being used by ordinary people, politicians, and news reporters (Masters-Waage et al., 2020: 2). These terms have had significant negative impacts on people from pan-Chinese societies, including mainland China, Taiwan, and Hong Kong, whether they are domestic residents or living overseas. Because of these negative connotations, incidences of violent anti-Asian and anti-Chinese crimes have increased in American and many European host societies (Gover et al., 2020: 648-649). The racial discrimination caused by the pandemic has resulted in uncertainty among pan-Chinese people, especially those living overseas, about how to perceive and perform their Chinese ethnic identity, as the reputations and images of people who speak in Mandarin Chinese have worsened during this pandemic period (Wang et al., 2021).

This article documents and examines how Taiwanese people living overseas perceive the concept of Chinese identity and question their ethnonational identity in the time of the pandemic. There are several reasons why the author chose Taiwanese people as the research subjects. First, Taiwanese society is still influenced by traditional Confucian and Chinese cultures. Additionally, it has the largest Mandarin Chinese-speaking population aside from mainland China (Huang & Wu, 1994: 69-70). Finally, Taiwanese people have experienced significant changes in their ethnonational identity in the past two decades, particularly during the pandemic. Thus, in this article, the author will further examine how Covid-19 has impacted Taiwanese living overseas on their perceptions and interpretations of their Chinese identity.

Before entering into further detail, it is important to briefly sketch changes in ethnonational identification that have taken place in Taiwanese society in the past decades, as this is critical background to discussion of this issue. Figure 1 is based on a longitudinal survey conducted by National Chengchi University, for which data has been collected annually from 1992 (National Chengchi University, 2021). 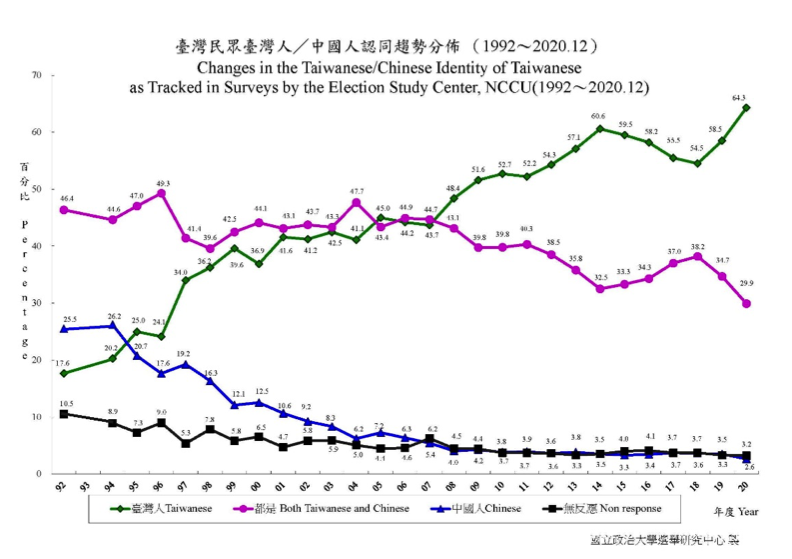 Figure 1: Changes in the Taiwanese/Chinese Identification among Taiwanese as Tracked in Surveys by the Election Study Center, NCCU (1992~2020.12), (National Chengchi University, 2021).

However, the main concern of this article is how Taiwanese living overseas perceive and negotiate their “Chinese identity.” The following examples draw from my own fieldwork experiences during my PhD project at KU Leuven in Belgium. Over the past three years (2017-2020), I conducted online and offline fieldwork at the Ecole Sun Yat-sen School (École Sun Yat-sen de Belgique) in Brussels and in several virtual communities on Facebook established by immigrants from Taiwan. I collected data by conducting participatory observation in the field both online and offline and within the Taiwanese diasporic community in Belgium. Accordingly, those participants who had emigrated to Belgium over a year earlier and who had long-term plans to live in the host society were invited to join further semi-structured interviews. A total of more than forty people participated in my project. They had diverse socio-economic backgrounds, emigration pathways, ages and religions etc., given that the study incorporated a diverse range of participants from the elderly generation of restauranters, young generation of working-holiday makers, students, immigrant housewives and high-skilled migrant workers. To ascertain how Belgian Taiwanese immigrants have navigated their ethnonational identity during the pandemic, I further conducted interviews in 2021 via several online platforms, namely, LINE, WeChat, Facebook message and Skype (Lin, 2020b).

Influenced by homeland politics in Taiwan, there are two main ethnonational identities in the Taiwanese immigrant community. Elderly immigrants (aged 60 and above) are more likely to identify themselves as Chinese. In contrast, most of the younger generation (aged 40 and below) identify themselves as Taiwanese. There are two reasons to explain why many elderly Taiwanese immigrants have kept their Chinese identity even after having emigrated overseas. Firstly, most of these immigrants grew up in the 1950s, and at that time, the Kuomintang (KMT) government educated people to identify themselves as Chinese, encouraging people to believe that one day the government would take the fight to the Chinese Communist Party (CCP) and return to mainland China. Thus, influenced by the KMT’s Chinese nationalist educational ideology, many people in Taiwan identified as Chinese at that time (Su, 2006). Many of the elderly interviewees in this study retained this identity after emigrating overseas because of the CCP government did not allow mainland Chinese citizens to emigrate overseas until it decided to implement economic reform policies and hence opened the border in 1978 (Pang, 2002). Thus, immigrants from Taiwan constituted the majority of the pan-Chinese immigrant community in many European host societies before the 1980s, including Belgium. As a result, as there were few immigrants from other parts of China to compete for the claim to Chinese identity, the elderly immigrants from Taiwan could feel free and safe to retain their Chinese identity in the host society at the time (Lin, 2020b).

The competition over Chinese identity has become increasingly severe due to the pandemic, as most Chinese immigrants from mainland China maintain a strong Chinese nationalist identity and continue to maintain that people from Taiwan are part of the People's Republic of China (Best & Huang, 2020). Their assertions make many immigrants from Taiwan feel uncomfortable and offended. Thus, in the face of the identity narratives held by mainland Chinese immigrants, some elderly Taiwanese immigrants feel they have no choice but to modify how they describe their ethnonational identity within their host society. Based on the author’s fieldwork experiences and interviews, many of the elderly Taiwanese immigrants in Belgium applied the identity negotiation strategies of “downplay” and “transvaluation” in negotiating and depicting their Chinese identity (Lin, 2020b; Lin et al., 2020). For example, some interviewees reported that they avoided discussing issues of identity with others, especially with their mainland Chinese peers, as they understand that identity is a sensitive topic. In addition to utilizing the ‘downplay’ strategy, some interviewees tend to apply the strategy of transvaluation in re-interpreting for themselves the meaning of being Chinese in a foreign land. One elderly interviewee, Alan, modified his own statement of identity from “I’m Chinese” (我是中國人) to “I’m Chinese from Taiwan” (我是來自臺灣的中國人), in elaborating the differences between himself and other immigrants from mainland China.

Another interviewee utilised political virtues as a symbolic tool in drawing the ethnic boundary between herself and mainland Chinese peers. Alice, a 70-year-old immigrant, said:

“…yes, I still identified myself as “Chinese,” however, the Chinese I mean in here is different from the Chinese from the mainland since we are the Chinese [ie. from Taiwan] who embrace and value freedom, democracy and human right[s], but they do not…, so, for me, yes, we are both “Chinese”, but we are different…”

However, it is interesting to note that young Taiwanese immigrants apply quite different identity negotiation and performance strategies as compared to their elderly counterparts. Some of them show their Taiwanese identity in their daily lives in very banal ways (Hearn, 2007). Mrs. Yang, for instance, has lived in Belgium for around five years since she married her Belgian husband. After the pandemic worsened in April 2020, she consciously began carrying a Taiwanese-style flower-printed bag with “臺灣, TAIWAN” written on it in big lettering with her every day, as shown in Figure 2. She further explained the reason for her behavior as follows:

“…[The reason] I wear this bag everyday with me was because during the pandemic, the image of Chinese people in here became more negative than before… I did not like to be regarded as “Chinese”, thus, I took this bag with me to show others that “I’m Taiwanese, not Chinese,” and “I came from Taiwan, not China”… so, the aim of wearing this bag is to differentiate [myself]…” 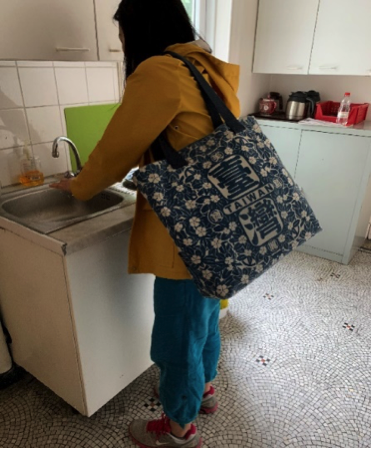 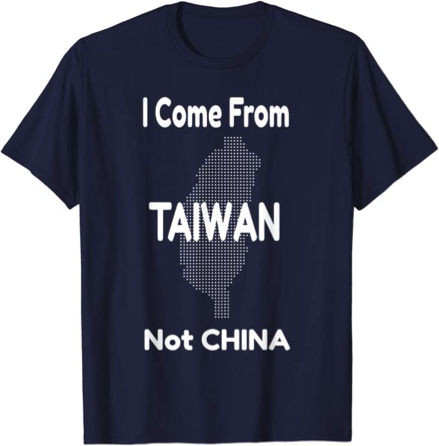 Another young interviewee (Eric, a 26-year-old male) bought a special T-shirt, shown in Figure 2, with the words with “I Come From TAIWAN Not CHINA” printed on it. He shared his reason for wearing this T-shirt, especially during the pandemic, stating:

“…during the pandemic, as so many local Belgians call me as “Chinese,” but I did not like to be considered as “Chinese”, so, I bought this T-shirt online… and you know, I feel so good wearing this T-shirt and I have to say that because of the pandemic, my Taiwanese identity has become stronger…”

To summarise, as demonstrated in the analysis above, before the pandemic, Chinese identity was gradually losing its attraction for most people in and from Taiwan. Instead, more of the Taiwanese population are identifying themselves as Taiwanese only. The pandemic has boosted this development and further decreased the popularity of Chinese as an identity choice. The author's study and fieldwork experiences echo the perspective that people’s ethnonational identity and ethnic boundary are not static but fluid, and can be changed through living in different social environments and interacting with different people (see Davenport, 2020; Sanders, 2002; Barth, 1969).

However, the long-term impacts of the pandemic on the ethnonational identity of Taiwanese people living both domestically and overseas deserve further examination. Moreover, as this study primarily relies on the author’s fieldwork in Belgium, it would be interesting to examine Taiwanese immigrants’ experiences of identity negotiation in other host societies. Finally, as the voices in this study included only first-generation migrants, the perspectives of Taiwanese migrants born overseas should be taken into consideration in future research.

Pang Ching Lin (2002), “From invisible to unwanted immigrants? The Chinese communities in Belgium,” Migration: A European Journal of International Migration and Ethnic Relations, 33: 197-217.