Sinophiles between Flatland, Fetish, and Feuilleton 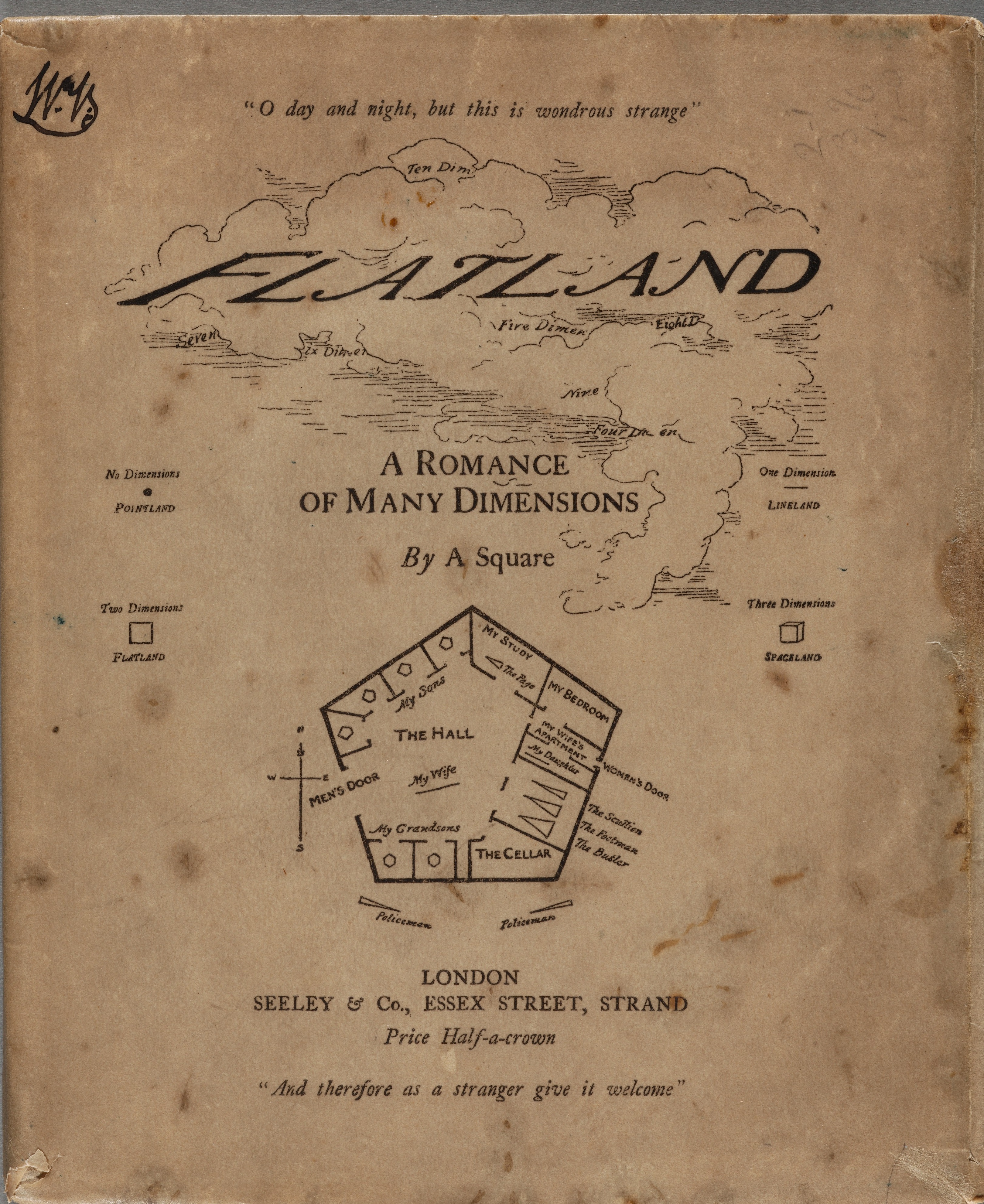 Despite (or because of) the increasingly fraught relationship between the Chinese and English-speaking parts of the world, Chinese studies today finds itself blessed with a wealth of voices, both within academia and without. The author argues that it is this aspiration toward a plurality of perspectives, rather than the seductive illusion of One Right Answer for All and for All Time, that best encapsulates the value of Chinese studies in the Covid-19 pandemic, or in any other time.

Sinophiles Between Flatland, Fetish, and Feuilleton

“Ut ameris, amabilis esto!” (In order to be loved, be lovable!)

In Edwin Abbott Abbott’s 1884 novella, Flatland (subtitled “A Romance of Many Dimensions”), a certain “Anonymous” Square describes life in a two-dimensional world (“Lineland”) ruled by circles – the highest caste in a society where a shape’s standing in the social hierarchy is decided by how many sides it is born with. Visited by a sphere (who appears to him as circle of varying circumfixes), A. Square briefly ascends to the three-dimensional world (“Spaceland”). When he is brought back down to his native Lineland, he discovers himself incapable of bringing those around him – particularly the monarch – to accept the possibility that a reality exists in which more than two sides are possible and ends up imprisoned for heresy. In our own world, glued to chat windows and Zoom boxes, wandering through the delimited physical spaces of our homes, all while the most vulnerable continue to deliver our food, teach our children, drive our buses, and take care all of the other little, indispensable things that make life in the twenty-first century possible, Abbott’s feuilletonian fantasy would seem to have a particular “resonance” in our present moment.

In Hartmut Rosa’s formulation, a resonant metaphor bears “a sociology of the relationship to the world” (Susen, 2019). For the subset of a subset of us who happen to study, teach, or write about China, we have found ourselves in two-dimensional Lineland for years, if not decades, hounded (or haunted?) by the “black and white cats” of Deng Xiaoping’s famous aphorism. Mutatis mutandis, the last two years have seen the nails hammered ever further into the coffin of nuance. In the US, Trump’s “trade war” comes as a blustering coda to Kissinger and Haig’s Cold War policy of “strategic association,” with public indifference shifting back into open hostility, with inevitable echoes of nineteenth century “Yellow Peril.” While in China, a previously laissez-faire cultural policy has given way to a much more constrained sphere of possibility under Xi Jinping, with countless international film, music, and art festivals cancelled, museums closed, and studios demolished. In the US (and even more so the UK), Chinese enrollments have reached unforeseen heights, while in China, study abroad has cratered, with several programs closing due to anemic interest from American and European students, and scholarships going wanting for applicants. And all this was before the arrival of Covid-19.

As anyone who’s spent time in the trenches of Chinese 101 will tell you of course, even in the flush years, double digit enrollments for anything beyond the introductory level of the language are (unfortunately) the exception rather than the norm. (My own first- and second-year teachers at Portland State, Jonathan Pease and Stephen Wadley, did their Wheelockian best to offset the attrition, as one should, with the two things Chinese literature does best: poetry and ghost stories.) But compared to the optimism accompanying the “Olympic fever” of just a few years prior, students today seem to be far less willing to even take a chance on China. In this, we may be seeing a regression to the mean, rather than a temporary dip in enthusiasm. As Abbott’s contemporary Max Müller (likewise a proponent of theological diffusionism, or the idea that primitive polytheistic societies evolve towards a monotheistic, Christian singularity) argued in 1890 that China is not “near to our hearts” because “China is simply old, very old – that is, remote and strange” (quoted in Girardot, 2002: 3). In his magisterial biography of the Scottish missionary turned translator and Oxford don, James Legge, Norman Girardot reads this as a dim appraisal of the apparently meager fruits of Legge’s own herculean efforts (Giradot, 2002: 482). Contra Müller, however, Giradot points out that the perceived “woodenness” of Legge’s translations says more about twenty-first century distaste for “Latinate classicism, Old Testament diction and syntax, term question pieties, Evangelical earnestness, and preacher's long-windedness” than it does with their accuracy – or, following McLuhan, we might say that the problem lies more with the medium than it does with the message (Giradot, 2002: 358). Likewise, David S. Nivison has argued that Legge’s labors represent an “extraordinary conscientiousness that refuses to smoothe over a spot in the text where the translator feels the sense to be difficult to ascertain. [His] awkwardness is therefore actually a virtue, and it is not his only virtue” (1980: 95). Accurate, they may be, readable, they are not.

In many ways, however, Legge’s proclivity for foreignization and parentheses, memorably diagnosed by Lin Yutang as his “fetish of literalness” (1959: 51), was as much a reflection of stuffy Victorian missionary Orientalism as it was of his unsurprisingly sympathetic Oxonian understanding of the role that the classics had come to play in shoring up the status and privileges of scholar-officials throughout China’s long history. As US deputy national-security adviser Matt Pottinger recently argued in a controversial speech commemorating the May Fourth Movement, “The inaccessibility of the written language [in China] presented a gulf between rulers and the ruled – and that was the point. The written word – literacy itself – was the domain primarily of a small ruling elite and of intellectuals, many of whom aspired to serve as officials. Literacy simply wasn’t for ‘the masses’” (Pottinger, 2020). While the speech has drawn ire both in China and abroad (its hypocrisy, coming from a representative of the thuggish Trump administration, has been suitably eviscerated by Geremie Barmé), the point stands. Alleged folk origins of the Classic of Poetry or teahouse echoes in the great Ming novels notwithstanding, the arts and letters of China have rarely been the arts and letters of common people – a point which reached its ironic apex at the height of Socialist “Realism” under Mao.

When we ask, “what use is Chinese studies in a pandemic?” we may as well ask, “what use is anything studies in a pandemic?” The obvious answer may be, not much at all. (As Simon Leys liked to say, quoting Zhuangzi, “People all know the usefulness of what is useful, but they do not know the usefulness of the useless” 人皆知有用之用，却不知无用之用也). Having descended to the narrowly proscribed confines of Lineland, we find ourselves boxed in. “Little Pinks” xiao fenhong 小粉红 and “Angry Youths” fenqing 愤青 to our left and race-baiting, China-bashing demagogues to our right, the outlook from spring 2020 certainly looks bleak – or as Lin Yutang originally put it, writing in the politically charged moment of the late 1920s:

To the East we have a family of proles; on the West it’s a nest of fascists. But we’re unimpressed with the lot of them. If you want to tie me down to some “ism” or other then all I can say I just want to be a human being.[1]

Returning, for a moment, to Abbott, before ascending to Spaceland from Lineland, in a dream, A. Square first descends to the monologic singularity of Pointland – ruled by a single monarch, whose power is ultimate. The point (pun intended) would seem to be that any “humanism” worthy of the name should aspire to a plurality of perspectives, rather than the seductive illusion of One Right Answer for All and for All Time. Despite (or because of) the increasingly fraught relationship between the Chinese- and English-speaking parts of the world, to my eyes anglophone Chinese studies today finds itself blessed with a wealth of voices, both within academia and without. Projects like the ever-excellent Chinese Storytellers newsletter, for example, highlight the all too often overlooked contributions of Chinese and Chinese American journalists to the political and social discourse; Reading the China Dream fills out the picture with an angle on the intellectuals; Neil Clarke and his merry band of pranksters over at Clarkesworld continue to bring much needed attention to Chinese science fiction (in addition to that of other languages); or Paper Republic (as of last year, a registered charity in the UK!) and the Leeds Centre for New Chinese Writing, which do the same for Chinese language fiction more broadly. Practical demonstrations of the overwhelming plurality of human thought like these encapsulates, for me, the value of Chinese studies in a pandemic, or in any other time.

Pottinger, Matt (2020), “Remarks by Deputy National Security Advisor Matt Pottinger to the Miller Center at the University of Virginia,” May 4, 2020. Accessed at: https://www.whitehouse.gov/briefings-statements/remarks-deputy-national-security-advisor-matt-pottinger-miller-center-university-virginia/.